Enjoy a complimentary one on one introduction to Aerial Yoga!

At the BERLIN YOGA CONFERENCE  (July 9-11. 2021) participants are invited to enjoy a personal one on one introduction to this exciting new yoga style with Jost Blomeyer from aerial-yoga.de. No prior knowledge is needed. According to your likes and abilities your personal session in the Aerial Yoga hammock can last up to fifteen minutes. Jost is blending his experience as a yoga teacher, fitness expert and professional dancer into a unique style of flowing Aerial Yoga. His Intermediate Sequence video has been watched on YouTube over 300.000 times. 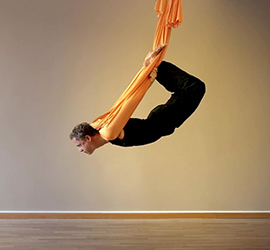 Aerial Yoga is a fascinating new type of training with an “aerial silk” acrobatics fabric. It combines aerial arts with efficient functional sling training and yoga. A unique feature are the inversions known from Hatha Yoga and which can be practised in Aerial Yoga while suspended. The renowned Indian yoga teacher B. K. S. Iyengar, a pioneer of modern yoga, had the idea to suspend himself upside down from the pelvis. He attached two ends of a harness to a wall. The technique is the same as in Aerial Yoga. It reduces the pressure on the vertebral discs and the back muscles can relax. Apart from the positive effects on the back, the exercises are great fun when swinging and turning. Sling training can be used for strengthening and stretching: one part of the body is in the moving suspended hammock and the other on the ground. The own body weight is used as a resistance weight which can be altered by the body position in relation to the suspension. This challenging and yet comfortable artistic hammock also invites to some relaxation. Aerial Yoga can be practised at a yoga studio, at home or even outdoors. All you need is a hammock and somewhere to attach it to.

Jost Blomeyer is one of the most experienced Aerial Yoga teachers in Europe. He has introduced this innovative exercise programme in TV shows of ARD, Arte, RTL, N-TV, Sat.1 and ZDF as well as in print magazines, online and on radio.

After his training as an actor, singer and dancer – amongst others at the State Ballet School in his hometown Berlin – he performed at the Metropol Theatre. He danced in musicals from “A Fiddler on the Roof” to “West Side Story”, acted in the TV series “Gute Zeiten – Schlechte Zeiten” and was the choreographer for the German boy band “Strong Together”.

While studying for a degree in architecture and being confronted with back pain due to prolonged sitting, Jost turned to health-oriented training. He got certified as a fitness and aerobics instructor and soon became a teacher at the TÜV-Akademie for future trainers. After he discovered yoga, he took over thousand hours of training classes in France, the Bahamas and Texas to become a yoga teacher in the Sivananda and Ashtanga Vinyasa styles. He was licensed at the Yoga Alliance (500 Hours Level, Multi-Style).

After receiving his diploma from the Technical University Berlin he discovered his interest for psychology and the mind-body connection and immersed into numerous qualification programs like EMDR Therapist, NLP Trainer, Wingwave Coach and Non-medical Practitioner for Psychotherapy. Since 2004 he is working as a workshop trainer, coach and therapist both nationally and internationally. He is the founder and owner of metatraining.

In 2009, after his training in AntiGravity Aerial Yoga, he was one of the first to teach this programme in Germany. He was also certified in Aerial Flow Yoga (Unnata Aerial Yoga style). He integrates his knowledge as a certified trainer in yoga, fitness, aerobics, Pilates, Blackroll fascia training and in TRX suspension training into his lessons. His yoga classes combine a mixture of good humour and serenity, strenuous exercises and concentration on breathing, followed by relaxation. His main focus is on Aerial Yoga, Vinyasa Flow and Ashtanga Yoga.

A yoga sequence by Jost was published on DVD for the magazine “Tip: Edition Aktiv leben”. On TV he spoke at the zibb-Infomagazin about yoga, weight reduction and light relaxation at the PC work station and he demonstrated practical exercises. He recorded the CD “Relaxing Body & Mind”, which contains progressive muscle relaxation as well as yoga relaxation. His DVD Meditation und Yoga für Coaches und Therapeuten was recorded during his 60 minute presentation at the DVNLP congress “Coaching”. He also recorded yoga video series for the training portals Loox (McFit) and My Mat & Me. For the Spiegel Online yoga special Das große Yoga ABC he has demonstrated five modern styles: AntiGravity Aerial Yoga, Acro Yoga, Ashtanga Yoga, Iyengar Yoga and Jivamukti Yoga. The magazine Yoga Deutschland published a cover story on Aerial Yoga with Jost.

Currently he is featured in a Fitbook video, were he demonstrates Aerial Yoga and talks about the origins, advantages and benefits of this new yoga style: Warum diese Trendsportart für fast jeden geeignet ist.